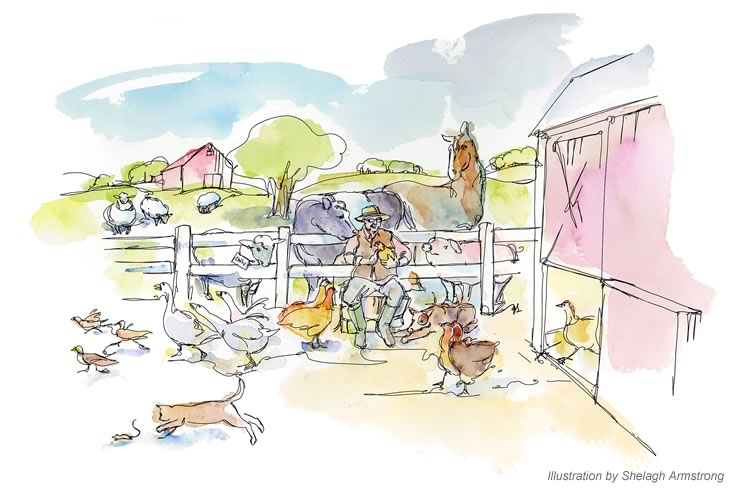 Every time there’s a divorce in the neighbourhood, I get more chickens.

Anyone who owns a pickup truck knows that whenever a friend is going through a transition, they always ask you to help them move. If you also have a farm and a barn, they will ask you to bring the truck and take a pile of stuff off their hands, usually forever. Over the last 32 years I have stored mountains of furniture, fleets of cars, boats and trailers, and a ton of fine French bric-a-brac. I also get a lot of animals – dogs and cats, ducks and geese, the odd sheep or pig, wind-broke horses, and even cows. It tells you a lot about the state of farming in this country when people just drive up and drop off livestock at the gate.

It’s a reverse form of rustling. One time I came back to the farm late at night and found a sheep I didn’t recognize in the pen with a note pinned to its fleece: “Dan – This is Dolly. She’ll be very happy with you. Best, Robert.” (That was another divorce.) Dolly was getting up in years and had never been sheared. When we finally got the wool off her, it weighed more than Dolly.

I now have 25 hens in my coop, most of them ready for the pension. I get about three eggs a day from the flock, which is obviously a total waste of time and chicken feed. The only explanation I can offer for my chicken habit is that I like them. They run toward me, not away from me. They are all so quiet I can pick them up and put them on my lap for a visit. They even have names. I know it’s ridiculous but these birds have been loved so dearly by their former owners that I feel responsible for them.

Every so often, someone comes back to visit or even reclaim their loved one. But that is rare. Bobby Ransier, the handyman and problem solver of this community, left me three chickens last fall and he’ll be back for them any day now. He has built a massive henhouse at the end of his driveway that he calls Club Cluck, with hot and cold running water, a sound system tuned to Classical FM, and a remote camera hooked up to his iPhone for 24-hour security. But it is not insulated,  so he sends the hens up to me for the winter.

A lot of my chickens are licensed because they once lived in town. This is yet another symptom of decay in our culture and a sure sign the revolution is at hand. It will not be long now, comrades. Chicken police from the provincial marketing board patrol the neighbourhood in big black Escalades. The township even has a chicken inspector, which is nuts. When I was growing up in North Toronto in the 1950s we had five henhouses on our street, including our own. Of course, there were complaints, but they came from people like the high-strung plastic surgeon next door who got upset if a feather blew onto his lawn. Nobody paid him any mind.

My cattle herd started with a drop-off. A neighbour had an orphan calf that he thought was unlikely to survive, so he gave her to me. She was a belted Galloway, a heritage breed called the Oreo Cookie cow because of the distinctive white band around its belly. (You eat the middle first.) I called her The Duchess, and like a good Russian Romanov, she enjoyed ill-health for many years and produced a line of sickly ne’er-do-well calves who did their best to bankrupt the state. The Duchess was eventually carried off by a summer complaint and is buried out in the orchard beside a hundred other displaced animals who have lived out their declining years in these meadows.

People ask why I let people do this to me. “It must be hard to leave the place,” they say. That’s true, but as long as I crop the fields and keep the pasture full of animals, the property-tax people accept that I’m a farmer and are less likely to reassess my property as rural residential and double my taxes. Just to be on the safe side, when an old sheep expires, I stuff it and stand it up with wires out on the hill so it shows up on their aerial photos.

Still, if you’re thinking of dropping off a dear old friend, please don’t. There is already a very long waiting list.

For the past two years, everybody has … END_OF_DOCUMENT_TOKEN_TO_BE_REPLACED

As a writer I rely heavily on the … END_OF_DOCUMENT_TOKEN_TO_BE_REPLACED

I was in a little arts and craft shop … END_OF_DOCUMENT_TOKEN_TO_BE_REPLACED