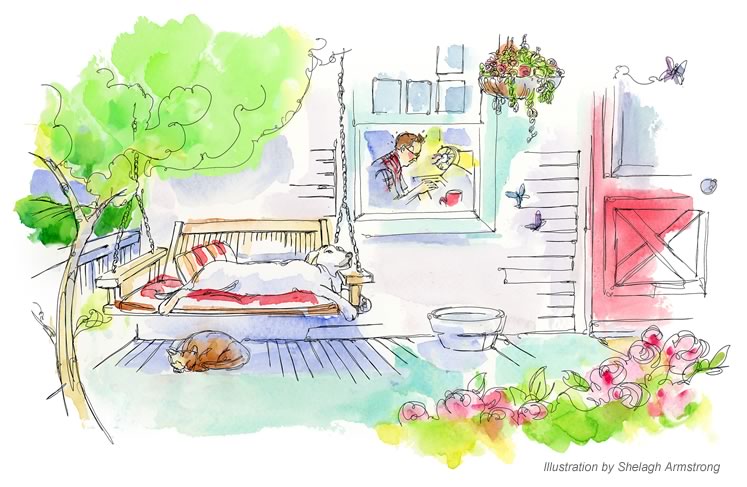 As a country person ages, there is a temptation to imagine the approach of a quiet and graceful retirement – long, dreamy summer afternoons napping on the porch swing while grandchildren romp in the yard. That might be a happy possibility for the hedge fund manager in a condo beside the golf course on the edge of town, but not here, not for a freelancer and a farmer like me.

First of all, although we do have a porch swing, the dogs get to it long before I do. Second, there are no grandchildren in sight because my sons are wary of entanglements and I have defended my daughters so vigorously over the last two decades they have decided to keep dogs instead of husbands. I am now blindly throwing my daughters at every man who passes by.

The third complication is a barnyard full of sheep, chickens, donkeys and pigs, and a rooster that crows every morning at dawn. Waking up to a rooster’s crow has a natural, organic feel to it and I used to enjoy being pulled gently from slumber by his joyful cry. The trouble is the rooster also wakes my wife’s donkey, Maggie, who is a very different sort of alarm clock. A donkey shrieking under your bedroom window at first light does not wake you up in places, like the rooster. It wakes you up all over. After being jolted upright by one of Maggie’s stentorian moose calls, I experience eight hours of the most wide-awakeness I have known since my days in naval cadets.

Morning chores leave me wobbly and winded by breakfast. Then the day begins, for freelance writers never know when to stop. None of us gets a letter from the vice-president on the management floor saying, “We regret your skill set does not meet our present needs and your services are no longer required.”  I once tried writing a letter like that to myself, but there was no outplacement team to escort me to the curb. Age 65 came and went without a gold watch or a cake, or any of those earnest speeches assuring me how much I would be missed. The phone just kept ringing with more deadlines from determined editors. People continued to corner me in the supermarket and demand to know what I had done lately.

My dad was a Shakespearean actor who remained on stage until he was 86. I was surprised when he suddenly decided to pack it in because even at that age he could still remember lines and trudge around in costume. It was actually cheaper to get him to play old guys because he didn’t need makeup. But he claimed it was “very hard on the young people.” He said, “I come out on stage and the play just suddenly stops. You hear people whispering all over the auditorium, ‘I thought he was dead!’” So Pop hung up his tights and went home, as he put it, “to sit on my veranda and die.” Except he didn’t. He lasted another 11 years without any noticeable change.

People tell me I have good genes. Nearly all my ancestors smoked, drank vodka tonics, ate red meat, and lived without serious ailments until they were well into their 90s. My father might still be with us today if he hadn’t taken every meal at Swiss Chalet from the day it opened in 1954. He was a lifelong hypochondriac and started hanging onto the furniture to keep his balance when he was in his 50s. He wore out several doctors, visiting them every week to report some pop or gurgle his body had just made. He insisted he had never really felt well since that bout of Spanish flu he picked up as an infant in 1919. No MRI ever revealed anything wrong with him and he carried on doing his crosswords every morning, feeding his birds and going up to the theatre to run lines with young actors in the green room. And one day his heart just stopped.

I hope this is my fate. I have organized the feeding program here so that I no longer press-gang the children and their friends into slugging square bales from the fields. A young cash cropper neighbour delivers all the hay I need with a giant tractor and builds a stack the sheep munch through all winter without me having to do much more than cut strings. I believe this is the secret to agriculture for seniors. Let everybody else, including the animals, do as much of the work as possible, but don’t start hanging onto the furniture.

Keep moving. Meet deadlines. Don’t limp. Look after the life around you like a good steward of the manifold grace of God and never, ever turn your back on the ram.

For the past two years, everybody has … END_OF_DOCUMENT_TOKEN_TO_BE_REPLACED

As a writer I rely heavily on the … END_OF_DOCUMENT_TOKEN_TO_BE_REPLACED

I was in a little arts and craft shop … END_OF_DOCUMENT_TOKEN_TO_BE_REPLACED