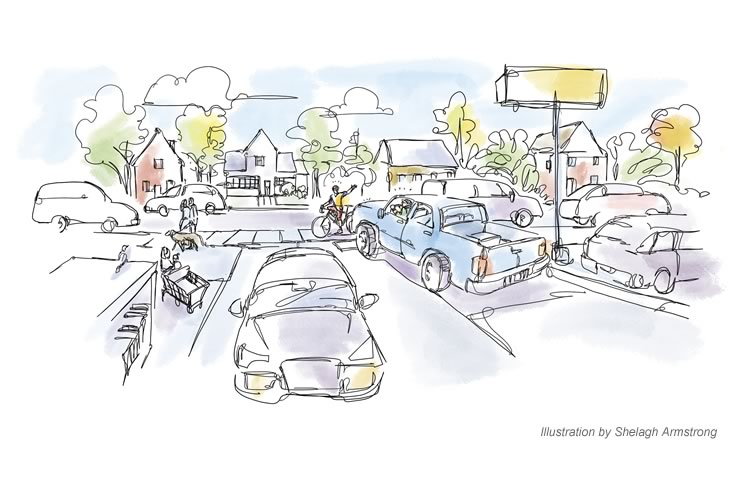 Last time I picked up a prescription, the poor pharmacist put his hands to his forehead and wailed, “This used to be a quiet little town!” But progress has come to my little rural community since the pandemic hit. For generations the only people in Canada who had a good word to say about Toronto were the ones living there. Now even they have decided they don’t like it and thousands of them have left to take up residence here. All those second and third homes for city people that sat empty for nine months a year have suddenly filled up with the owners’ sisters and their cousins and their aunts, and the population has doubled.

Predictably, the pace and intensity of traffic has ramped up as well. It used to be you seldom heard a car horn on the streets unless someone was tooting hello. If you made the mistake of blasting someone, it always turned out to be the minister at the church or some sweet-faced grandmother who gave piano lessons to your daughter.

Those days are gone. The lineup for lattes and Americanos that snakes out of the drive-thru coffee shop and onto the main street, strangling traffic to one lane, produces a chorus of outraged honks from 8 a.m. till noon. The last time I went into town for groceries, I drove past a line of shaking fists and extended middle fingers down to Wendy’s to join the drive-thru lane for a hamburger. As I was giving my order, a little black sports car sped up from another side of the parking lot and nipped into the line ahead of two white vans behind me carrying construction crews. More shouting and fist waving, this time with the aggrieved parties half out of their windows screaming profanities and foul slurs at the line-hopper, who sat staring straight ahead with his cell phone at the ready to record any direct threats to his person.

I got to the grocery store and the cashier said it was nice to see a friendly face.

“People are so impatient and angry,” she sighed. “You can’t do anything without someone yelling at you.”

I loaded my groceries into the truck and moved out into traffic, waiting at the stop sign for a couple with a dog to cross in front of me. As I nudged ahead, watching for a gap in the stream of traffic coming from my left, a burly cyclist in Spandex came zipping up the sidewalk from my right and swerved around the front of the truck. There was barely three feet between my bumper and the oncoming traffic.

He braked and whacked the hood of the truck. “You’re supposed to stop at that white line!” he shouted.

“Bicycles are not allowed on the sidewalk,” I said as mildly as I could. “If you have wheels, you are supposed to be on the road.” He barrelled on, middle finger extended skyward in reply.

Sheesh, I thought. What has happened to this place? Should we be living here anymore?

I drove back to my sideroad south of town, a beautiful patch of farmland as yet untouched by sodium lights and monster houses. For some odd reason, nothing has changed in our neighbourhood since I bought the farm in 1978, apart from two new houses out at the corner where the mailboxes stand. (We call them The Subdivision.) A township construction crew was still at work replacing culverts along our road. I drove around the barriers past a sign that said “Local Traffic Only” and shortly met a township truck parked across the road as a giant yellow excavator scratched out the ditch. A woman in a hard hat got out of the truck and came to my window.

Me, in a rush? My family would burst out laughing.

“Ice cream?” came a voice back on the radio. Suddenly the excavator folded up and swivelled 90 degrees, exposing a truck-sized hole for me to pass through. The flag man stepped up and waved me around like I was an emergency vehicle. As I passed, the flagman and the machine operator both grinned and gave me the index finger, a traditional sign of greeting and affection in a rural community.

It was a lovely moment. I found myself at home once again. 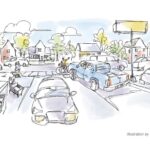 Last time I picked up a prescription, … END_OF_DOCUMENT_TOKEN_TO_BE_REPLACED 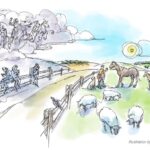 Last month, as my kids gathered at the … END_OF_DOCUMENT_TOKEN_TO_BE_REPLACED 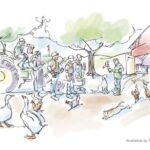 I was just reading a piece in the New … END_OF_DOCUMENT_TOKEN_TO_BE_REPLACED