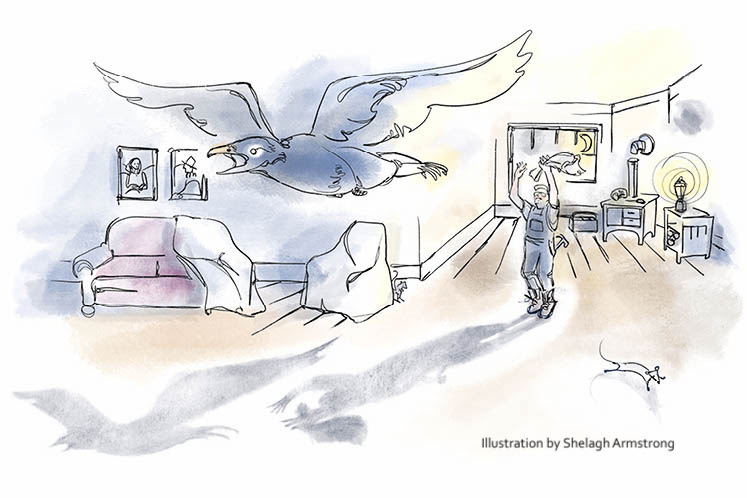 As a writer I rely heavily on the neighbours for inspiration. They have always been a reliable source of suspect information.

When I bought the place nearly 50 years ago, Kenny Jardine, the old bachelor next door, informed me that one of his relatives had developed rabies, lost her mind and leapt to her death from the upstairs window. The neighbours heard her shrieks and ran to the scene, but by the time they got here, it was too late. People tried to live here after that, but all of them were driven out by the ghost. Kenny told me that each tenant heard a sound like fingernails scratching at the windowpane. They said that was Mad Katherine trying to get back into the house.

While I was doing renovations, which were extensive, I wrote up Kenny’s ghost story for a laugh in one of my magazines and promptly received an angry letter from a reader, a Dr. Jardine from the other side of the country, who said no member of the Jardine family had ever contracted rabies and some may have fallen off barn roofs, but none had ever jumped out a window to their death. The doctor pointed out that the upstairs window of my little house offered a fall of only 12 feet, which in his experience was seldom fatal.

On my first night in the house I was alone and the wind was up. With each gust the house would lurch to the east, creak and go “wubba-wubba-wubba.” And then it would lurch back to its resting position. This went on for more than two hours during which I experienced the most severe case of wide-awakefulness I think I have ever known.

Then about one o’clock in the morning the wind dropped and the moon came out, throwing shadows across the floor. In the stillness I heard a faint sound from downstairs. Scratching. It sounded very much like fingernails on a windowpane.

I am not a superstitious person. But the scratching didn’t stop. The part of my brain I like the best said, “Don’t go downstairs.” I went downstairs. I went toward the kitchen door, which had no curtains of any kind at the time, but … the silken, sad, uncertain rustling of each purple curtain / Thrilled me – filled me with fantastic terrors never felt before…

I opened wide the kitchen door. Darkness there and nothing more. I realized the scratching was coming from behind me, in the corner of the kitchen where the wood stove sat. There was something trapped inside the stovepipe. Pretty tight quarters for a ghost. Probably a bird.

I unscrewed the stovepipe and out hopped a raven. A grim, ungainly, ghastly, gaunt, and ominous bird of yore… Well, it wasn’t big enough to be a raven. But it was very black and covered with soot.

Okay, it was a starling. It stared at me for a moment, then leapt off the stove and flew straight into the wall, which I had just painted, leaving a black smudge. Then it hit the ceiling and the wall again. Then it flew into the living room and hit a lampshade. It did about four laps of the downstairs, leaving smudges on everything it hit. I waved my arms and told it, “Get thee back into the tempest and the Night’s Plutonian shore!” And it did. It found the doorway and flew out into the night.

That seemed to lift the curse. Next morning I wrapped some chicken wire around the top of the chimney and repainted the kitchen, and since then I have not had any close encounters of that kind.

My wife says there is a presence in the house, but it’s a friendly one. She’s a farm girl and a bit of a Druid, and is always warning me about passing her on the stairs, putting new shoes on the table or plowing down snow – acts that all residents of the old rural community see as omens of violent death. She thinks our house was just lonely with all the comings and goings over the years, and that long stretch of emptiness. But now the place is full of kids and dogs and chaos, and has a pleasant hum, and our ghost isn’t lonely anymore.

There is still a faint smudge from the raven on the wall. I’ve tried painting over it, but the shadow still is sitting, still is sitting, just above my kitchen door. Unless I wallpaper it, I fear that shadow will be lifted … nevermore!

For the past two years, everybody has … END_OF_DOCUMENT_TOKEN_TO_BE_REPLACED

As a writer I rely heavily on the … END_OF_DOCUMENT_TOKEN_TO_BE_REPLACED

I was in a little arts and craft shop … END_OF_DOCUMENT_TOKEN_TO_BE_REPLACED