For the past 30 years I’ve made a living writing about rural Canada, which is a bit odd considering I am an immigrant to this patch of ground I call home. I’m an American immigrant for my sins. I am descended from two families of peasant farmers who fled across the Atlantic in the 1600s in search of free land and spent the next three centuries roaming North America trying to figure out some way to get off that land and into some employment that offered a decent living.

Both families did well and were eventually able to prosper in the city. But I turned the clock back by buying 40 acres on the Niagara Escarpment. I first saw the little frame farmhouse in 1977 when I was young and single and still working in the city. It looked like the last hideout of Jesse James and Cole Younger. The windows were broken and most of the rolled asphalt siding had shredded away in the winds, exposing the original pine boards. The old stone foundation had crumbled underneath it and the house was shored up with two ancient barn beams. There was a cow standing in the kitchen. I remember joking to the realtor, “This listing will not last.” 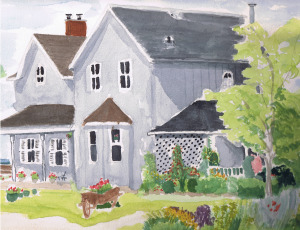 Even then, it had a long history as a weekend property. The last serious owner to take an interest in the place was a local boy, James Currie, who moved to the city before World War II to work as a welder but returned faithfully for holidays and long weekends, until his death in 1968. Then it passed through the usual indignities of a run-down country property: flipped, rented, pastured and generally vandalized. Although it was now a home for mice and raccoons, I sensed that the house had once been loved.

It had a good feeling to it and I kept finding little treasures that could be saved. The pine floors were four inches thick and the wood stove still worked. I salvaged a cast iron floor lamp and turned the skylight above the front door into a hall mirror. In the front yard, there were four ancient Bartlett pear trees that produced fat yellow pears in August. My neighbour helped me find and dig out the clay tile drains in the fields. The abandoned railway allowance at the back of the farm gave me a steady supply of perfectly preserved railway ties for fence posts. Digging in the garden I found potsherds, pieces of French copper and stone tools left here by the Petun Indians of the 17th century.

That first summer a group of friends helped me do a plaster-bashing weekend and so began the slow process of weekend renovations on a tight budget. I built a new foundation further back from the road, hired a crane to move the house onto it and remodelled inside and out. Every summer, for the next ten years, I took on some new project: tree-planting, a verandah, stone walls, fences and gradually the property came back to life.

Then I got married, quit my job at the insurance company and moved back to the farm to live here permanently and make my way as a writer. From the moment she set foot in the house, my wife agreed that it did have a good feeling to it. She said it was just waiting to be made into a home and loved. For three rugged winters we lived in a space that wasn’t much bigger than my little apartment in the city. We built a new sheep barn, more fences, a bigger garden and started bringing hay in from the fields every summer. After our second child was born, we built an addition to the house that doubled our living space.

Shortly after we moved here full-time, the welder’s wife, Nellie Currie, came by on a Sunday outing from her nursing home but we were out and missed her. She left a note in a shaky scrawl saying that she and her husband had always wanted to move back here and do what we had done with the farm and she wished us well. I was glad that her lilacs, spirea bushes and pear trees hadn’t been disturbed. Even her great-grandmother’s wild roses still bloom along the fencerow where the first log cabin stood. Years later, Nellie’s daughter sent me a poem her mother had written for her husband shortly after his death. I still remember the first verse: 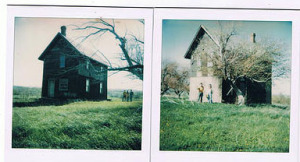 “I thing I’ll go up home today,”
You often used to say.
When sun and wind would whisper
Spring is on the way!

My children look at our little oasis and I can see them wondering how on earth they are supposed to find a place like this for themselves the way the world is today. I tell them that life is a constructed thing. You build it one little piece at a time. And eventually, if you’re very lucky, you look back at a faded photo of yourself standing in a stiff breeze in front of an abandoned house in a treeless pasture and you shake your head wondering, “What on earth was I thinking?”

For the past two years, everybody has … END_OF_DOCUMENT_TOKEN_TO_BE_REPLACED

As a writer I rely heavily on the … END_OF_DOCUMENT_TOKEN_TO_BE_REPLACED

I was in a little arts and craft shop … END_OF_DOCUMENT_TOKEN_TO_BE_REPLACED