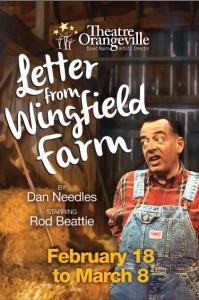 When a captain of industry trades his pinstripe suit for overalls and retreats to a hundred acre farm, the residents of Persephone Township raise their eyebrows. Weekend farmers are a common enough sight, but this man seems to think he can make a living with a broken down racehorse and a single furrow plough.

In his second season on the farm, Walt faces the spectre of urban development. Can he mobilize the neighbourhood to save the rustic splendour of Larkspur? Does Larkspur want to be saved?

In his third year on the farm, after two profit-free seasons, Walt finally pinpoints the economic source of his problems. He sets up a closed economy with his neighbours, prints his own currency and falls in love.

In his fourth season and his first as a married man Walt tries to preserve the memory of the old rural community by promoting the crumbling Hollyhock Mill as a museum site. But the locals say the mill is haunted.

As the first frosts set in, Walt and Maggie are expecting their first child. Walt’s attempts to mend the feuds that divide the community meet with a resistance as stiff and cold as a Persephone Township winter. And the biggest challenge to them all is looming on the horizon. 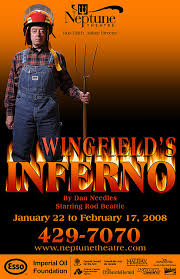 A devastating fire at the Orange Hall in Larkpur leaves it a smouldering ruin. Walt Wingfield leads the charge to get it rebuilt, but lighting a fire under his fellow committee members proves a daunting task. Is it courage they lack, or is the devil in the details?

In the midst of a record drought, wells on the Seventh Line are drying up. A search to locate a new well on Wingfield Farm puts Walt in the company of an eccentric water witch. Is it the end of farming for Walt and Maggie, or can the precious liquid be found? 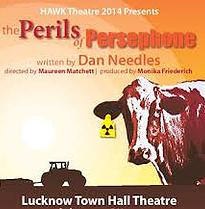 The Perils of Persephone

Reeve Currie sounds the alarm the night a nuclear waste truck crashes into the swamp on his dairy farm, only to discover that the truck isn’t nuclear at all. An embarrassed Minister of the Environment and his political fixer organize a desperate cover-up.

A popular former farmer and part-time mechanic finds a new vocation giving advice to people with problems. Complications arise when Cassandra, an urban psychotherapist sets up a private practice next door.

In the days of the small square bale, everybody was basically happy. Sure, we had no money and we worked like rented mules, but we were happy. A farmer couldn’t overproduce and drive down prices and go broke fast the way we do today. That’s because a man who tried to get his family to move more than ten thousand of those square bales in one season faced a mutiny. If a kid was ambitious he could toss bales for the neighbours all summer: first cut in June, second cut in July, third cut and the straw in August. It kept him out of trouble, built up his muscles and made him so relieved to get back to school he forgot to complain how dumb the teachers were.

And Dad, by the time he was 65, he was so sick of getting piled into the feeder by the cows on an icy day in March, he couldn’t wait to hand over the farm to the kids.

But then some clown went and invented the big round bale. Suddenly, you don’t need the family out in the hayfields. One guy on a tractor can twist up all of the hay from here to Hall’s Hill without getting chaff down the back of his neck once. So the kids have nothing to do all summer and they have to find jobs in town. They learn about video arcades, beer and crystal meth. Suddenly you’ve got a problem with vandalism and youth crime.

Even worse, the old guy doesn’t know when to quit. He puts a heated cab on the tractor and feeds those big round bales to his cows all winter without getting snow on his boots. He gets his hips and knees replaced so he can haul himself into the tractor and sit there like he’s in an office chair. And the kids get sick of waiting around for him to quit the farm. They go to the city and work for the bank selling junk bonds and derivatives or worse… they run for office. Instead of doing something useful, they’re networking and manipulating and profit-taking and sitting in outdoor cafés sipping their machiatto cappuccinos and talking about relationships and real estate…

The Team on the Hill

Austin Ransier, the patriarch of the Ransier family, watches from the veranda as his son and grandson wrestle over the future of the farm. He sees things that others don’t and the family assumes he is lost in the past. But Austin’s visions have more to do with possibilities…

Two children take in an abandoned turkey, only to find that it was supposed to be the main dish at the local church Christmas supper. With the help of an owl, a skunk and a cat the children take to the woods to save their feathered friend.

(Coming to Theatre Orangeville May 2015)

A young couple struggle to make their dream of a small winery come true in spite of a strange spirit that haunts the property. But this is a ghost with even more problems than they have and it may hold the key to the success of the vineyard.

For the past two years, everybody has … END_OF_DOCUMENT_TOKEN_TO_BE_REPLACED

As a writer I rely heavily on the … END_OF_DOCUMENT_TOKEN_TO_BE_REPLACED

I was in a little arts and craft shop … END_OF_DOCUMENT_TOKEN_TO_BE_REPLACED