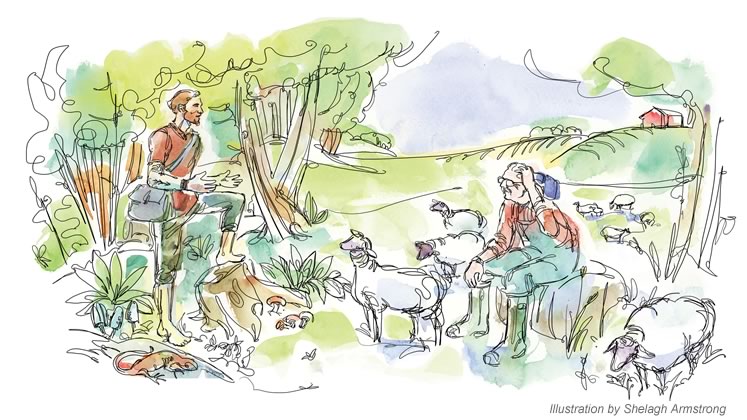 I’ve always felt like a bit of a rebel, living as I have for nearly 40 years as a back-to-the-lander and filling the freezer every fall with food I produce myself. But to the bearded hobbits in my son’s rock-climbing group, I am hopelessly mainstream and a slave to the military-industrial complex.

The rock climbers in our neighbourhood are a fascinating breed and I enjoy their company. Vegans, pacifists and herbalists don’t make me flinch the way they once did. I’ve come to agree with poet William Blake who said the man who never changes an opinion becomes like standing water “and breeds reptiles of the mind.”

Science now agrees that changing your mind actually improves brain health. According to the Mayo Clinic, rigid thinking leads to rigid everything else in the body. I now try to change my mind about things as frequently as possible. This is not hard when you still have adult children in the house.

One of these opportunities to view the world differently popped up a few weeks ago when a barefoot climber emerged from his van to collect my son for a day on the Niagara Escarpment. (His name has been withheld for privacy reasons.) He had feet like a Sherpa guide. I took him over to the sheep barn and showed him my small flock of crossbred lambs, thinking he might be impressed with my efforts to feed the house from this little acreage.

He said bluntly that farming was a blight on the planet, a guzzler of fossil fuels and pretty much the source of most of our current problems. “Farming is the cause of social stratification, coercion, alienation and overpopulation,” he said solemnly. “Humans did not raise armies until they started farming and had to defend their land.”

He said he preferred wild food. He is a forager. He lives on mushrooms and forest greens, and he drinks a lot of reishi and kombucha teas.

“Ah, the Paleo diet without the meat,” I said, and told him about my grandfather, the founding eccentric in our family, who invented his own Paleo diet 20 years before The Stone Age Diet was published by a California gastroenterologist in 1975. I left out the part about my grandfather being a total nutbar who walked away from his medical practice and spent the last 30 years of his life in the basement making birdhouses.

“So, this township is not a great place to forage between November and April,” I said. “What do you eat then?”

He allowed that not all the food he finds is wild. Some of it comes from dumpsters behind grocery stores where tons of perfectly healthy vegetables are tossed because they don’t meet the rigid standards of the fresh produce aisle. That was a line in the sand for me. At my age dumpster diving is not recommended. Besides, I live in a small town and eyes are everywhere.

I asked him what sort of work he did and learned that foraging is really a state of mind and can be a full-time occupation. The young man has explored every square foot of the Escarpment and follows a rigid code of simplicity that would challenge a Trappist monk. He treads lightly on the earth and shuns invasive practices like hammering steel pitons into cracks in the rock. He is an ardent follower of the creed of “clean climbing,” using only nuts and runners that leave no mark on the rock face. Yvon Chouinard, the billionaire founder of Patagonia, called it “organic climbing for the natural man.”

The conversation turned abruptly to politics. My hobbit friend classified himself as an anarcho-primitivist. I told him I generally wake up Conservative each morning, but by nightfall I am inclined to anarchism myself. Anarchists are not the bomb-throwing crazies of my grandfather’s era. The national anarchist party in Greece now occupies several floors of a downtown office tower in Athens. He smiled and we agreed that just because you hate structure doesn’t mean you have to be disorganized.

We parted friends and, apart from the snaky business of dumpster diving, I felt my mind was still relatively uncluttered by reptiles.

For the past two years, everybody has … END_OF_DOCUMENT_TOKEN_TO_BE_REPLACED

As a writer I rely heavily on the … END_OF_DOCUMENT_TOKEN_TO_BE_REPLACED

I was in a little arts and craft shop … END_OF_DOCUMENT_TOKEN_TO_BE_REPLACED